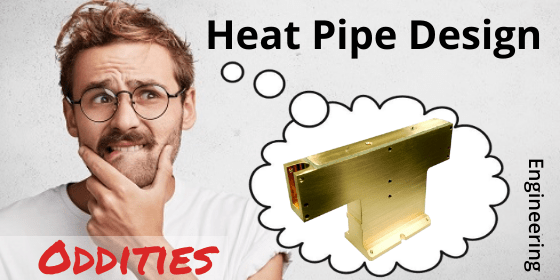 Heat pipe design is generally a straightforward process, but sometimes custom requirements can yield atypical vapor chamber or heat pipe designs. I won’t be focusing on the specifics of the application or perhaps even the operating parameters. Rather, I’ll talk about only the requirements which drove each quirky solution.

As often happens, we were brought into the heat pipe design process after PCB and enclosure layout was finalized. Keep out zones were fixed, condenser size was adequate for the airflow, but the tentatively planned 6mm flattened heat pipe didn’t adequately cover or cool the CPU and GPU that were upstream from the condenser. Note – this picture only shows the one connector but there was another toward the end for the CPU. 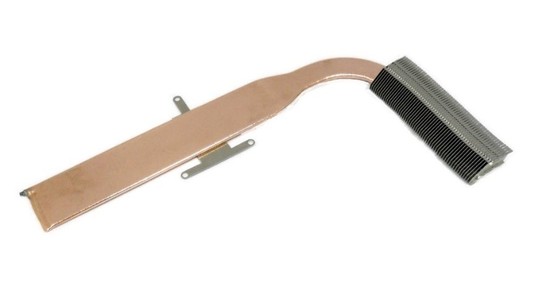 Given design constraints and performance requirements, a two-heat-pipe alternative was not an option nor was a larger flattened heat pipe. We ended up swaging most of the length of a 6mm pipe before it was sintered and flattened. As you know, swaging a pipe reduces wall thickness and makes the resulting flattened device very week and potentially uneven over its length. By adding a support grid inside before flattening, we are able to keep the vapor within the device flowing freely while allowing a good degree of clamping pressure.

With two-phase devices, engineers typically choose either a vapor chamber design or a heat pipe design. In this instance, again because of design constraints, we needed both. This example is from a gaming oriented small form factor desktop using a higher end Intel processor. The customer wanted to move to the next generation with lower power but much lower max operating temperature (that means smaller thermal budget), without any radical change to the current thermal solution. As I’m sure you’ve guessed, it didn’t take a great leap of engineering acumen to suggest we replace the solid copper base plate with a vapor chamber (see our heat sink performance calculator). 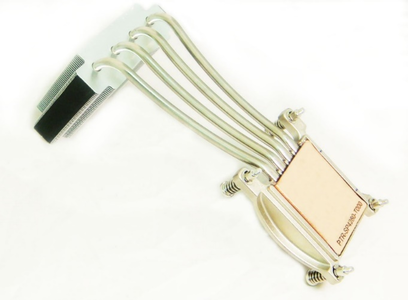 Given heat pipes were already being used to move and distribute the heat to the condenser, we achieved a 4-6 degree C performance improvement from this solution. With a bit of fan speed tweaking from the system manufacturer, we were able to achieve the required performance targets.

This design requires a standard 12mm copper heat pipe to be TIG welded to a machined square end – both using a sintered wick. The device is then nickel plated. 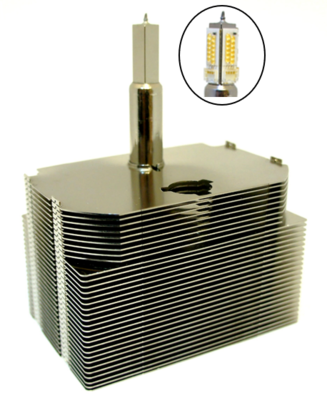 Due to optical issues, this heat pipe required 4 flat surfaces to which the LEDs are mounted. Additionally, it was required to work in any orientation. The design required a very specific wick structure in order to meet the targets. Initially, the design used a two-piece design, machined evaporator welded to a round tube. The second generation, cost reduced part is made from a single square tube.

Because vapor chambers are usually made from upper and lower stamped plates, they don’t lend themselves to shapes in the Z-direction. Over a decade ago, Celsia created a vapor chamber from a single very large tube, much like a heat pipe. The resulting width can be up to 110mm, yet be as thin as 2.5mm. Of course, we add an internal support structure. 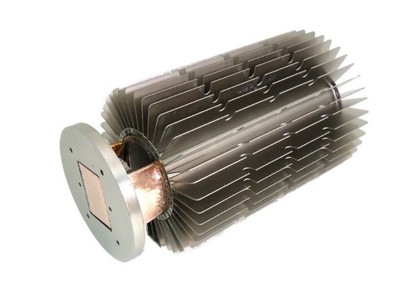 The result is a vapor chamber that can be L or U-shaped yet still allowing for direct contact with the heat source. Although direct contact heat pipes are possible, they require machining which increases cost and they’re less effective at reducing hot spots on the die face. Additionally, the portion of the vapor chamber ‘legs’ that run along the inside of the condenser are slightly curved.

In high-performance test equipment, there are many unique challenges. The vapor chamber on the left allows for multiple parts to be fastened to it which is then liquid cooled at its base. This part is machined from solid copper incorporating two internal chambers that use sintered copper as the wick structure.

A machined vapor chamber incorporated into the heat sink on the right allows features such as a pedestal. The pedestal is hollow and is part of the vapor chamber that moves the heat to the copper fins. 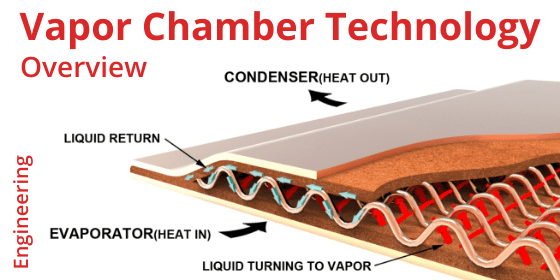 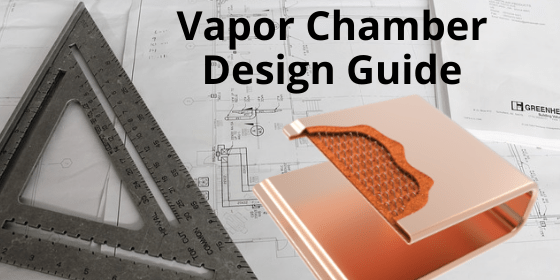