The focus of this heat pipe design guide is on sintered copper heat pipes (w/water) for electronics cooling applications. This typically translates to dissipated heat of between 20-200 watts (less if power density is high) and power density up to around 25 W/cm2. If you need more basic heat pipe information, please visit these two pages: Heat Pipes 101 and Heat Pipe Technology Overview

This heat pipe design guide will cover the following topics:

Used properly, and under the right conditions, heat pipes dramatically improve heat sink performance. This design reality is due to the very high thermal conductivity of heat pipes; generally between 10-100 times that of solid copper. Unlike solid metal, heat pipe thermal conductivity changes with several variables – length being the most notable. Consequently, very short heat pipes of 50mm or less have thermal properties that might be better served by using solid copper or aluminum. Here are the most common usage configurations for heat pipes as part of a heat sink assembly:

Heat pipes are used to move heat, in any direction or orientation, from the heat source (evaporator) to the heat sink (condenser). Pictured below are a couple of examples.

When a two-phase device is needed yet cost is a driving factor, heat pipes can be used to spread heat to a local heat sink. A vapor chamber in either of these two applications will reduce the total heat sink delta-T by 4-9 oC . The improvement is due to the lower thermal resistance of a vapor chamber as well as the way it interfaces with the heat source (direct contact). Note that both these examples use a solid copper spreader that attaches to the heat source, then heat moves to the heat pipes (indirect contact).

The theoretical operating temperature limits of sintered copper water heat pipes are 0-250 oC, although in practice heat pipes don’t really start to operate until around 20 oC. Below 0 oC, the water freezes within the sintered wick structure but causes no damage due to expansion as the amount of liquid is so small. For example, a typical 6mm heat pipe that’s 150mm in length contains about 1cc of water.

A quick note on heat pipe reliability. Heat pipes have been extensively tested for decades. Their typical lifespan is at least 20 years and can go through thousands of freeze-thaw cycles without damage. Heat pipe failure is most likely to occur A) due to poor manufacturing processes and B) as a result of exposure to unplanned conditions: corrosive substances and unintended physical damage are the most common. Celsia mitigates the first cause of failure by helium testing every heat pipe for leakage and Qmax performance. The second cause of failure can be addressed by nickel plating the heat pipe. 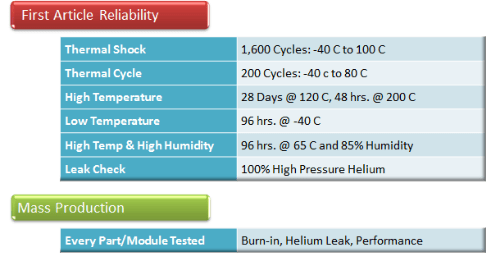 The below chart provides heat pipe specifications and tolerances. Please contact us with any additional questions. 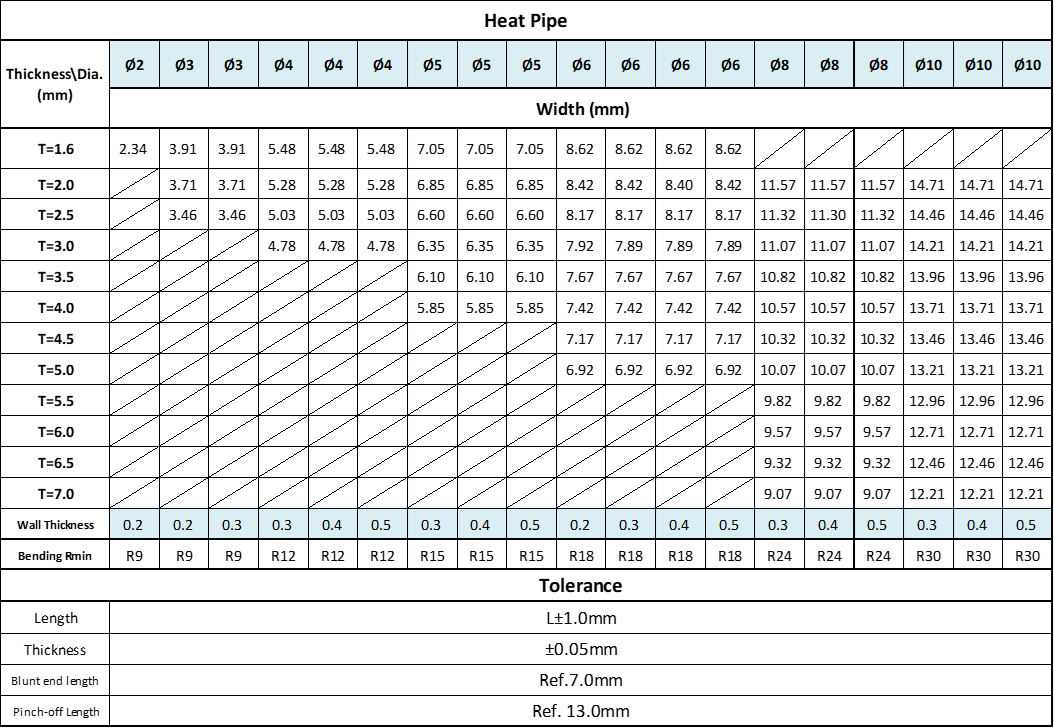 Heat pipe carrying capacity (Qmax) is a measure of the amount of heat in watts the device can carry. It is governed, mainly, by the capillary limit of the sintered wick material whose performance can be modified by varying the thickness and/or the porosity/permeability of the wick. However, there is no one ideal wick design. It changes depending on the application requirements.

Celsia’s online Heat Pipe Calculator provides performance information based on two wick designs: standard and performance. However, we regularly design custom wick structures to precisely match customer requirements. These include the ability to vary the wick structure from one portion of the heat pipe to the next. Please contact us if you require performance figures not presented here.

The charts below show output from the heat pipe calculator using the following user-selected parameters:

The first chart shows heat pipe carrying capacity (Qmax) vs Angle of Operation. At +90 degrees the evaporator is directly below the condenser, at –90 the reverse is true.

Use the Heat Pipe Calculator 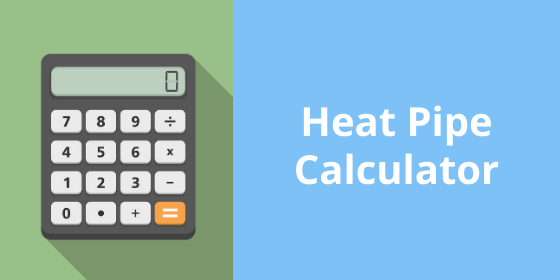 While this chart shows a nearly 90% drop-off in Qmax from +90 to -90 (standard wick), the accompanying table (not shown) gives the precise Qmax by angle. For instance, if the application requires the heat pipe to operate a no less than horizontal (0 degrees), an 8mm heat pipe will carry 62 watts of power from the heat source given the input parameters shown earlier.

Before heat pipes are integrated into a heat sink, engineers have several secondary operations to choose from.

Why does flattening smaller heat pipes have more of a negative effect on Qmax?  Simply put, there are two heat pipe performance limits important for terrestrial applications: the wick limit and the vapor limit.  The wick limit is the ability of the wick to transport water from the condenser back to the evaporator.  As mentioned, the porosity and thickness of the wick can be tuned to specific applications, allowing for changes to Qmax and/or ability to work against gravity.  The vapor limit for a particular application is driven by how much space is available for the vapor to move from the evaporator to the condenser.  It is the lower of these two limits, for heat pipes that have been designed to meet application requirements, that determines Qmax. 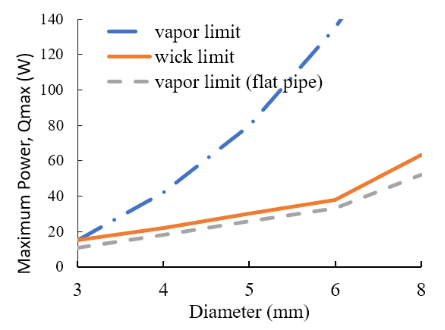 The above chart illustrates this dynamic. The round 3mm heat pipe (blue and orange lines) has vapor and wick limits that are almost identical. Flatting it to 2mm results in the vapor limit below the wick limit. For a 6mm round heat pipe, there is a lot of excess vapor limit so the Qmax won’t be diminished until the pipe is reduced considerably.

Bending the heat pipe will also affect the maximum power handling capacity, for which the following rules of thumb should be kept in mind.

Nickel plating heat pipes is done to protect against corrosion in situations where the parts are exposed to the environment. It can also be done purely for aesthetic reasons.

Assume a 20 x 20mm heat source dissipating 70 watts of power with a single 90 degree bend – what are the appropriate heat pipe options?

As can be seen from this analysis, both heat pipe configurations are adequate to transport heat from the evaporator to the condenser.  So why choose one over the other?  From a mechanical perspective it may simply come down to heat sink stack height at the evaporator, i.e. the 8 mm configuration has a lower profile than does the 6mm configuration.  Conversely, condenser efficiency may be improved by having heat input in three locations versus two locations, necessitating the use of the 6 mm configuration.

There are two often used methods for connecting heat pipes with the evaporator: indirect and direct.

The more cost effective method of mating heat pipes to a heat source is usually through a base plate. This can be done with either an aluminum or copper plate (shown on left). In addition to cost advantages, this method also allows heat to be distributed more evenly to each heat pipe in situations where the heat source is much smaller that the heat pipe contact area.

Direct interface from the evaporator to the heat pipes is usually reserved for situations where the base plate and associated additional TIM layer needs to be removed for performance reasons as shown in the image to the left. This comes with cost implications as the face of the heat pipes needs to be machined in order to make the needed thermal connection with the heat source.

Heat Pipe Soldered to Heat Sink Base | Attached Through FIns

When moving heat to a remote condenser, there are two common heat pipe mounting configurations. The first is identical to the method above. Namely, flattened heat pipes are soldered to a flat base or round heat pipes soldered to a grooved base.  If the fin stack is large, heat will need to be distributed more evenly by running the heat pipes through the center of the fin stack as seen in the above right image.

When working in a CFD program like FloTherm or developing an Excel model, there comes a point where you need to input the heat pipe effective thermal conductivity. Here’s how to find these figures using our Heat Pipe Calculator. After entering the required inputs, the first table of the Calculator provided heat pipe effective thermal conductivity figures.

When early in the modeling cycle, there’s a fairly good way to cheat if you don’t have access to this calculator. Simply multiply the power input into each heat pipe by an estimate of it’s thermal resistance – this will give you the estimated heat pipe delta-T. For heat pipes from 3-8mm use 0.1 oC/W  or 0.075 oC/W for larger ones. Then enter in a thermal conductivity figure (start at 4,000 W/m-K and go up) until the modeled delta-T equals the roughly calculated detla-T.

Contact Us with Questions or To Receive a Quote 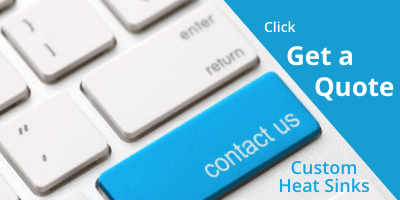 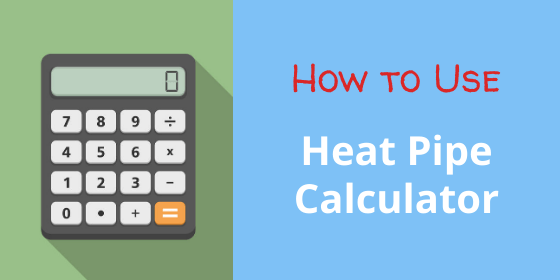 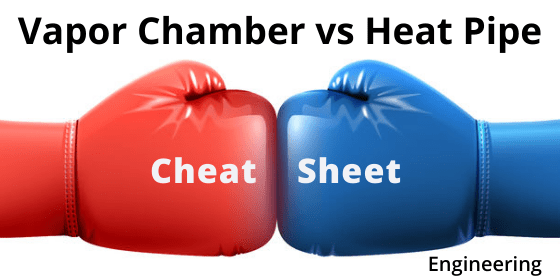